US officials have started to investigate why a Virgin Galactic space rocket crashed over California’s Mojave desert on a test flight.

One pilot died and the other was badly injured when SpaceShipTwo exploded shortly after take-off on Friday.

A National Transportation Safety Board team arrived in Mojave on Saturday and was heading to the crash site.

Virgin chief Sir Richard Branson said he was “determined to find out what went wrong” and learn from the tragedy. 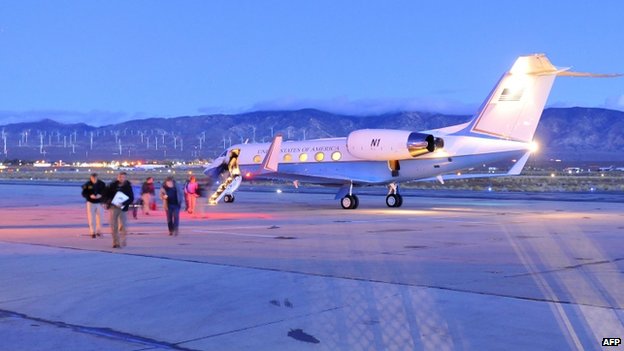 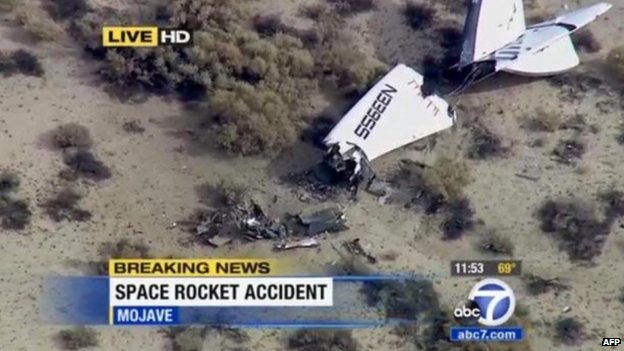 Speaking at the at the Mojave Air and Space Port, where the craft was being developed, Virgin Group founder Sir Richard said “nobody underestimates the risks involved in space travel”.

“We owe it to our test pilots to find out what went wrong, and once we find out, if we can overcome it, we will make sure that the dream lives on,” Sir Richard added.

Eyewitness Ken Brown: “It burned for a time and then just exploded”

Sir Richard said Virgin Galactic and its partners had “been undertaking a comprehensive testing programme for many years and safety has always been our number one priority”.

A team of between 13 and 15 NTSB investigators – including specialists in structures, systems, engines and vehicle performance – arrived in Mojave on Saturday morning and would begin on-site work later in the day, NTSB acting chairman Christopher Hart said.

Their work would include detailed examination of all available data, work at the crash site and interviewing witnesses, Mr Hart said.

“This was a test flight and test flights are typically very well documented in terms of data,” he added.

Wreckage from the crash is scattered across a large area of the Mojave desert, north-east of Los Angeles. Police secured the site amid fears that some of the debris could be explosive.

The disaster occurred shortly after take-off

‘Serious anomaly’SpaceShipTwo was flying its first test flight for nine months when it crashed shortly after take-off near the town of Bakersfield. 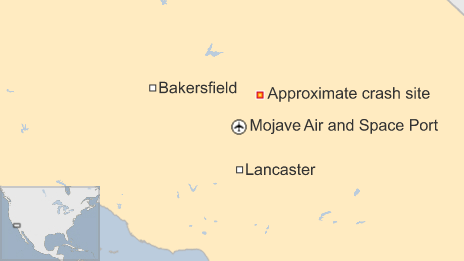 In a statement, the company said SpaceShipTwo experienced “a serious anomaly” after the craft separated from its launcher, an aircraft called WhiteKnightTwo.

It later emerged that the space craft was burning a new type of of rocket fuel never before used in flight, although officials said it had undergone extensive ground testing.

In a blog post on Friday, Sir Richard said everyone involved in the project was “deeply saddened”.

“All our thoughts are with the families of everyone affected by this tragic event,” he wrote.

Even as details emerge of what went wrong, this is clearly a massive setback to a company hoping to pioneer a new industry of space tourism. Confidence is everything and this will not encourage the long list of celebrity and millionaire customers waiting for their first flight.

An innovative design combined with a new type of rocket motor make the development exceptionally hard. Despite an endless series of delays to its spacecraft, Virgin Galactic has over the years managed to maintain some very optimistic public relations and positive media coverage.

I interviewed Sir Richard Branson when he first announced the venture, and his enthusiasm and determination were undoubted. But his most recent promises of launching the first passenger trip by the end of this year had already started to look unrealistic some months ago.

This accident will delay plans even further. Space is never easy, and making it routine is even harder.

Back to
Login
Accessing this course requires a login. Please enter your credentials below!
Lost Your Password?