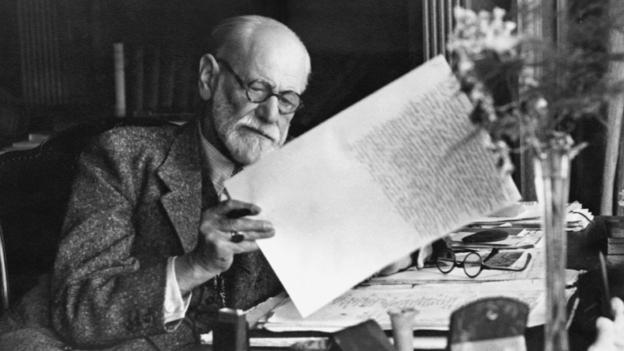 Sigmund Freud in 1920 (Corbis)
Psychoanalytic theory has changed a lot in the 75 years since his death, but literature still feels the strong influence of Freud’s ideas, argues Jane Ciabattari.
‘It will never be the same again’

Freudian slips. The Oedipus complex. The ego. The id. The superego. Sigmund Freud’s writings changed how we perceive human behaviour. The founder of psychoanalysis pioneered insights into perhaps the original unreliable narrator – the self – and opened the pathway toward increasingly complex literary characters with motives beyond the obvious.

“Every dream will reveal itself as a psychological structure, full of significance, and one which may be assigned to a specific place in the psychic activities of the waking state,” Freud wrote in his landmark book, The Interpretation of Dreams, published in 1899. From the beginning, his work was intertwined with the canonical literature of his time. He drew upon Sophocles, Goethe’s Faust and Shakespeare – especially Hamlet, King Lear and Macbeth – to explicate his understanding of unconscious motivations and the complex metaphors and displacements of dreams. He used the language of poets and novelists to outline irrational behaviour, pioneering concepts we have come to think of as commonplace.

To begin to understand Freud’s enduring impact on literature today, it is illuminating to trace the parallels between his writings and the work of his literary contemporaries.

“When I read one of your beautiful works I keep finding, behind the fiction, the same propositions, interests and solutions that are familiar to me from my own thoughts,” Freud wrote to Arthur Schnitzler, whose sexually explicit work, including the 1897 play Reigen (best known as La Ronde) was banned in Austria for nearly a quarter century. Schnitzler was, like Freud, trained as a neurologist in Vienna. And he was familiar with The Interpretation of Dreams. Schnitzler’s fiction includes dreams, Freudian symbols (mountains, lakes) and stream-of-consciousness, modelled on the “free association” Freud describes in Studies on Hysteria (1895).

Freud also corresponded with Austrian novelist Stefan Zweig, who noted in his 1931 biographical essay about the psychoanalyst, “Twenty years ago, Freud’s ideas were still thought of as blasphemous and heretical. Today they circulate freely and find expression in ordinary linguistic usage.”

Freud’s psychoanalytic theories and emphasis on the unconscious have shaped decades of conflicted characters. His theory of the Oedipus complex underpins many a literary work, from the incestuous relationship between Paul Morel and his mother in DH Lawrence’s 1913 novel Sons and Lovers to the present.

Freud’s work with traumatised World War I soldiers led to Beyond the Pleasure Principle, which fed into the character of Septimus Smith in Virginia Woolf’s Mrs Dalloway (1925). The modernist poet HD sought out Freud in 1933 when she was suffering from writer’s block, triggered in part by her dread of another devastating world war. Her 1956 book, Tribute to Freud, is a memoir of her psychoanalytic treatment.

Freud’s theories also have inspired literary critics for more than a century.

In the 1940s, Lionel Trilling noted the “poetic quality” of Freud’s principles, which, he wrote, descended from “classic tragic realism… a view which does not narrow and simplify the human world for the artist, but, on the contrary, opens and complicates it”.

Susan Sontag argued against Freud and for an “erotics of art” in her 1964 essay Against Interpretation. Harold Bloom applied Freud’s Oedipus complex to rivalries among poets and their precursors in his The Anxiety of Influence (1973), an approach given a feminist slant by Sandra Gilbert and Susan Gubar in Forward into the Past: The Complex Female Affiliation Complex (1985). Peter Brooks mined Freud’s dream-work for ideas of how novels are plotted in Reading for the Plot (1992).

Freud’s influence continues in the 21st Century. But today he is as likely to turn up as a character as a theoretical catalyst. Recently we’ve seen postmodern feminist novels such as the European Union Award-winningFreud’s Sister  by Goce Smilevski, translated from the Macedonian by Christina E Kramer (2012). This novel fictionalises the melancholy tale of Freud’s youngest sister Adolfina, who perished in the Theresienstadt concentration camp (four of Freud’s five younger sisters died in the Nazi death camps). Karen Mack and Jennifer Kaufman’s historical romance Freud’s Mistress (2013) spins a tale out of Freud’s alleged affair with Minna, his wife Martha’s younger sister. The producers of Downton Abbey have a TV series in the works called Freud: The Secret Casebook, set in fin de siècle Vienna, positing Freud as the first “profiler”, and delving into his own “tangled and provocative personal life”, Variety reported April 16.

Freud’s case studies, crafted as stories or novellas, have yielded endless bounty for fiction writers. The studies are rich texts to be questioned, critiqued, studied, imitated, modified and fictionalised.

One of Freud’s best known case studies, described in his 1905 Dora: An Analysis of a Case of Hysteria, involves a young woman with limb pains and a hysterical loss of voice, whose symptoms Freud sees as displacements of sexual feelings rooted in childhood memories. Lidia Yuknavitch’s edgy 2012 novel Dora: A Headcase, places Dora – whose real name was Ida Bauer – in contemporary Seattle with an analyst she calls Siggy. “I first read Freud’s famous case study on hysteria based on his client Ida Bauer when I was in my 20s,” Yuknavitch told The Rumpus. “It pissed me off so badly it haunted me for 25 years. But I had to wait to be a good enough writer to give Ida her voice back.”

The Dora case is also the basis of Sheila Kohler’s new novel Dreaming for Freud. A beautiful 17-year-old patient is taken to Freud by her father. “He wants her to be more reasonable,” says Kohler. “He wants her to have an affair with his mistress’s husband, but not to speak of it. She protests and she says the man has been after her since she was thirteen.” The girl finds Interpretation of Dreams in her father’s library and decides to invent dreams to bring to Freud, feeding him fabrications in their sessions that appear in his later case study.

“Freud’s case studies are all written as mysteries, like Conan Doyle,” says Kohler, who has been teaching a class called Reading Freud’s Great Case Histories as Short Stories at Princeton University this spring. “Each case study is a mystery. Each one he solves. Is he right? It doesn’t really matter.”

This mystery may, in the end, be the point.

Freud the author, awarded the 1930 Goethe prize for literature for his “clear and impeccable style”, catalyst for innumerable other writers, may be as important as Freud the scientist. The highest measure of his meaning may derive from the echoes of his voice in artistic work.