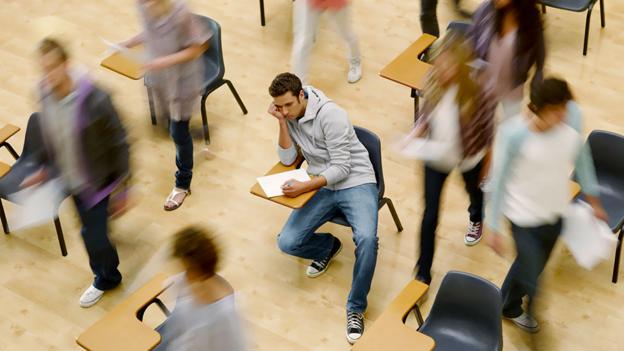 We have the technology to get rid of final exams and assess students differently, says Colin Barras, but are we ready yet?

Major exams are the bane of many a student’s life. They represent a one-off chance to scribble months or years of learning onto paper, and can make or break future career prospects. The trouble is that taking an exam at a time rigidly set by the academic calendar has never been an ideal way to determine competence – they may come at the right time for some lucky students, but not for many others.

Perhaps it doesn’t have to be that way. As teaching begins to move online, we no longer need to wait until the end of a course to perform assessments. Instead, computer software can assess understanding during the learning process itself by analysing a student’s every mouse click and keystroke. So could we finally be able to get rid of the dreaded final exam?

A better option is a system that allows students to advance at their own pace, as and when they have mastered the material, says Julia Freeland an education researcher at the Clayton Christensen Institute for Disruptive Innovation in San Mateo, California. This is called competency-based learning, and it requires tailoring the educational programme in a different way for each student. This is clearly something that teachers in a busy classroom may struggle to do. If course material is offered online, though, with the student’s input analysed automatically by computer software, students can be assessed individually – even to the point that the software can identify when a given student is likely to perform to their full potential on an exam.

Competency-based learning software is now being used both in high schools and in colleges across the US, says Freeland. The Virtual Learning Academy Charter Schoolin the state of New Hampshire is one prominent high school example. Western Governors University, an online institution based in Salt Lake City, Utah, introduced competency-based learning software in 2012. Arizona State University made a similar move in 2011.

The idea behind the software is relatively straightforward. It takes information about the student’s activity on a course website – the pages they have visited and whether the student has verified that they have read a passage of text or watched a video, for instance – and combines it with data on the student’s performance on informal tests and quizzes to establish in real time how well the student understands a concept. When that understanding reaches a predetermined level, the student is challenged with new concepts, or offered the opportunity to take a formal exam. Since this form of competency-based learning approach was introduced in some classes at Arizona State University, pass rates have reportedly increased. And Philip Regier, the dean of the university’s online arm, says there are now plans for doing “an entire degree adaptively”.

Some firms push the technology further. Their artificial intelligence software analyses the data collected toconstantly tweak the way it presents new information to the individual. Within a few weeks, claim their makers, these algorithms can even identify what time of the day a student is most receptive to lessons in a given subject.

It’s only within the last few years that technology has made this kind of approach to education possible, says David Liu, chief operating officer at Knewton, an adaptive learning company based in New York. In the six years since Knewton was founded, online data storage has advanced so far that Liu says the firm now knows better than anyone how well its students are progressing.

Other companies make similar claims. Among the most famous educational websites is that run by Khan Academy, a non-profit based in Mountain View, California. “We’re able to tell the user all through the process with high accuracy: this is how you’re performing right now,” says Jace Kohlmeier, who leads the analytics team at Khan Academy.

However, students assessed by the likes of Knewton and Khan Academy still haven’t escaped the exam hall just yet. For that to happen, well-established cultures in the school system would need to change. Fundamentally, says Freeland, high-school exams are still required in countries like the US for school performance assessment. And professional certification exams, both for high-school-aged and college-aged students, remain an important way for employers to assess candidates.

Still, the algorithms that firms like Knewton use to assess students are constantly improving – perhaps eventually their assessment precision will make them impossible to ignore. “Over time, with enough students and enough data going through our systems, we will be able to tell you how well a student is doing in a subject within a few percentile points,” says Liu.

It’s also worth noting that the learning software now being used in schools and some universities is beginning to find a use in business too. Networking manufacturer Cisco, for instance, now runs an online training and certification programme called NetAcad to identify talented candidates, says Freeland. And Liu says that Knewton is working with a number of firms – and even with government organisations – to implement some of its educational software beyond the classroom.

Developments like this means the business world could come to appreciate the potential of competency-based learning software to identify talent. That could eventually feed back into the education system and nudge out traditional exams – after all, says Freeland, it is in employers best interests to have a say in how students are certified.

For the time being though, if you’ve got an exam coming up, it would be prudent to dive into the books.